Ad facts for Hydropower for Voices 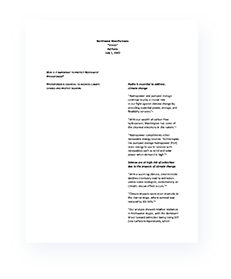 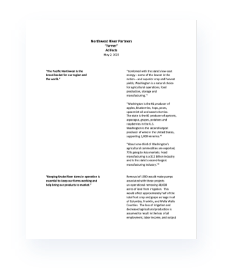 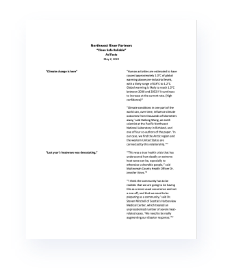 Murray-Inslee Report Confirms Importance of the LSRD, High Value of Hydroelectricity to the Region

Letter to Biden Administration from Salmon and Hydroelectric Supporters

Northwest RiverPartners is a not-for-profit, member-driven organization. Members include consumer-owned utilities, ports, and businesses from across the northwestern United States. The organization is focused on raising awareness about how the Northwest’s hydropower system betters communities and the natural environment and encourages science-based solutions that help hydropower and salmon coexist and thrive.es Here 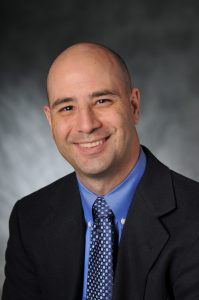 Kurt Miller is one of the nation’s leading advocates for hydropower and its role in our clean and equitable energy future. His expertise in energy policy has been featured in over 50 contributed pieces across numerous regional and national news outlets, and he is a frequent commentator on T.V., radio, and policy panels. As the executive director of Northwest RiverPartners, Kurt represents millions of public power customers across Washington, Oregon, Idaho, Montana, Wyoming, and Utah who rely on the affordability and reliability of hydropower to power their homes, businesses, and transportation. Kurt was a keynote speaker at Hydrovision International 2022, and an expert panelist at Clean Currents, the annual conference of the National Hydropower Association. He will also be featured on the January 2023 cover of Hydro Leader Magazine. Kurt is also active on the policy front and has advised the Western Congressional Caucus and the Western Senate Caucus on hydropower policy. Kurt has spent most of his 30-year career in leadership positions for electric utilities, bringing expertise in power supply and smart grid initiatives. Under Kurt’s leadership, Northwest RiverPartners has expanded its educational role through industry partnerships, thought leadership efforts, and community and tribal outreach projects and strengthened its emphasis on science and scientific-based studies.